Tonight the LiveJournal EGL community and it’s related EGL comm sales banned the discussion and sale of illegal replicas of copyrighted Lolita brand print, logo and mascot items at the request of a major Lolita brand later revealed to be Angelic Pretty, the oldest of the Lolita clothing brands, founded in 1979. 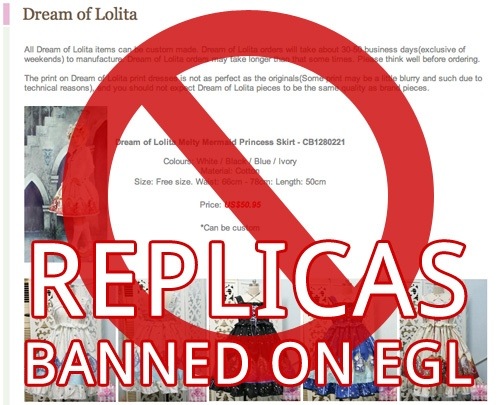 Since several major brands had already published statements on their websites regarding replicas, requesting support of the genuine items and asking their customers not to purchase replicas of their items and since the sale of illegal replicas violates the LiveJournal TOS, I’m not exactly sure why this decision by EGL was such a surprise or outrage to the Lolita community.

The following days brought some fierce outbiirk polarizing much of the vocal part of the comm that posts, though there were a good number of neutral responses as well who do not support the purchase of replicas but will not say it is wrong for others to do so. Over 950 comments were posted in the announcement thread between the 17th and the 25th. Lolita Tips blogged the above photo on Tumblr with news of the ban and there were over 250 likes and reblogs, with some of the arguments for and against forming in that thread also. There was a confusing flood of postings to ALL the major online Lolita communities, speculation on which brand had made the request, as well as quickly establishing the need to define what would fall under the ban. The anonymous bitterness on /cgl reached new epic proportions which was not surprising, but even on the LiveJournal EGL comm the logged-in comments quickly showed that many considered this an issue to take a known stance on.

Some of the focus was on defining the criteria of ‘What is an illegal replica?’ The short answer became and remains ‘Anything with a reproduction of a brand logo or distinctive text, first of all, in the print or on the lace. Second, the reproduction of mascot items like Baby the Stars Shine Bright’s Usakumya or Angelic Pretty’s fawn, Milky Chan, including any prints containing reproductions of these mascots. For accessories, this also means distinctively shaped zipper-pulls or texts. This would include Moi-meme-Moitié socks as well with their MmM embroidered lace, though they are still white-listed as an example for generic styling, that lace is actually proprietary to the brand. Enough so that it was a major point in a Facebook discussion on a popular replica maker’s wall when she was planning her fake Moitié.
Heart-buckle Tea Party shoes are exempt from the ban as are items like star and spade shaped bags as long as there is no stamped or embossed brand lettering reproduced on them.
Read more about the ban criteria here.

Moving this from my Tumblr on April 7, 2013 has given me some time and distance from the issue. Tempest in a Teacup or far-reaching repercussions for the hobby? On July 17th, 2013, you can read my ‘one year later’ thoughts on it here.

Read some opinions in the replica debate from before and after the ban:
Harajuju
F Yeah Lolita
Getoffegl
Parfait Doll

One thought on “EGL Bans Replicas”