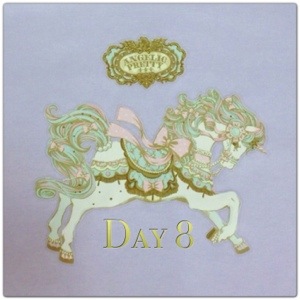 30 Days Lolita, Day 8, 10 songs that inspire you for lolita.
Music inspires me in everything and I have some deep feelings regarding music that I rarely share.
It has influenced me since I was a child, certainly played a very large part in my life since I began dance classes at a very young age. It’s very natural to me to move to music! I took flute lessons beginning at 9 and play it and a few other instruments as a hobbyist, but have performed both instrumental and vocal music at festivals and occasionally for hire.

I have sung softly in my sleep since before I knew how to talk (according to family teasing) and my dreams have fleeting, faery music in them, played on indescribable instruments that vanishes in my waking life. I will never be more than an amateur musician or vocalist and that is fine. For me it is enough to hear, move to and be moved by music.

OK, to the list, (more than 10 but I always listen in sets)
1. Lolita Libretto and Still Doll—Kanon Wakashima
2. Gothic Lolita—Emilie Autumn (odd but yes, it does though I had to have several people independently recommend it to me before I would even listen to it, haha! Though I like her classical, and unplugged violin and her harpsichord compositions more these days)
3. Chopin Etudes
4. Ballet music
5. Phillip Glass (twirl to his Opening and Closing in poufy skirts, practice bourrée, and I’m off to Fairyland)
6. Diru (esp Cage and Obscure, Ain’t Afraid to Die, Yokusou ni Dreambox, Blossoming Beelzebub) Though the members in Diru don’t especially like Lolita fashion…to quote Kyo, “Well, let’s say it’s not for everyone”…
7. Mana projects and Moi dix Mois (all of Reprise but specifically Secret Longing)
8. Celesta music in general
9. Certain Kate Bush songs (Cloudbursting was steampunk before most things were ‘steampunk’ and her ethereality and juxtaposition in her compositions very much reminds me of the quirky historical butterfly-like sampling and choosing of historical styles, symbols and motifs that comprises my Lolita Aesthetic.)
10.Certain Loreena McKennit songs (pure faery magic)