Since it’s Spring…what were your latest purchases or if you haven’t bought anything in a while, your latest styling of something Lolita in your current closet? To catch up, over the winter so far these are mine:
Vintage:
A pale peach lucite box purse
A vintage Italian Bergere made of finely braided straw
Cosmetics & Sundries:
3 pairs of circle lenses and a wig
Sugarpill Heartbreaker palette and the LE Red single shadow
Lime Crime Chinchilla lipstick and HollyBerry Carousel Gloss
Chanel Rouge Allure Velvet in a special color!
Burando:
BTSSB plaid pleated skirt from an old Lucky Pack
BPN swallowtail jacket with laced-on tails and
BTSSB Queen of Candyland in Pink, 2005 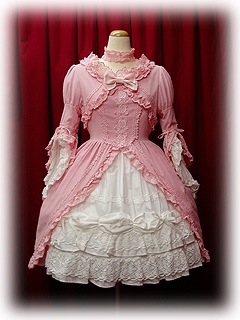 My Miss Kittiness pink-a-tude has taken a certain hold and I can tolerate wearing plain pastels as long as the styling has a degree of sophistication. Though im saving it back to wear or the first time at a special occasion, I just think it is a nice idea to have an old BTSSB dress and Rococo/Hime style has always been a favorite. The first items of AP when it was just ‘Pretty’ are already well past the 25yr ‘vintage’ mark and with the recent revival of Old-school and the anniversary and renewal versions of things coming out, I’m liking the nostalgic ‘old is new again’ feeling.

According to a thread in the Kansas City Lolita comm on Facebook, AP will do a tea again at ACen this year and we won’t go this time but I will need to slowly look for something AP that suits me for attending in 2014. It will likely take me that long too (-.-) EDIT: AP will attend ACen but not host the tea this year. In any case, I will eventually make one of their teas and reserved Day Dream Carnival, as you can likely tell by the graphics, and you can read about that here.

The dress code for the AP Tea last year was a little stricter than the BTSSB Teas at Anime Matsuri.
wearing AP was strongly suggested, replicas strongly discouraged and the usual ‘no cosplay’ rules applied. For men it was Black Tie, White Tie or formal Service Uniforms so G will have the handy excuse to get that tux he’s been waffling about, hooray! I will update with a copy of the dress code for 2013 as soon as I can.
Update: The tea seems to be an all-Lolita tea but I’m still going to check the dress code as it’s likely that rules like ‘no cosplay’ will be in effect.

I’m waiting on a Bodyline order but I won’t detail it until it arrives.
(Scandalously mixes BTSSB pix with AP gfx, don’t care!)